This gives me a unique insight into matters relating to the Island and, in particular, how I believe it should be managed and maintained. Views expressed here are my own and are not attributed to any other person or organisation. I hope, however, sharing them will be of general interest to others, particularly those living or aspiring to live on the Island. My aim is, simply, to promote the Island as a whole.

Note, whilst ever effort is made to ensure that the documents/information provided on this website is accurate I will not be held responsible in the event that this should prove otherwise!

Enfield Island Village, is an urban village on the boundaries of London, Hertfordshire and Essex bounded by rivers and canals (see it on Google Maps). The Island is on the North Eastern boundary of the London Borough of Enfield in picturesque surroundings flanked by the River Lee and Lee Valley Park to the West/North West, Sewardstone Marsh and Epping Forest to the East.

Historically part of Essex, it became part of the London Borough of Enfield after the closure of the Royal Small Arms Factory at the end of the 1990s. An estimated 3,000 people now live on the Island in over 1,300 private houses and flats and social housing. 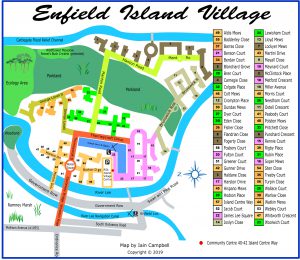 This is a constantly evolving ‘hobbyist’ website built using the new CSS Grid Layout – before then being converted into WordPress.  Note: the Internet Explorer browser does not fully support CSS Grids.  To view this website as intended use any other browser – Chrome, Firefox, Safari etc.